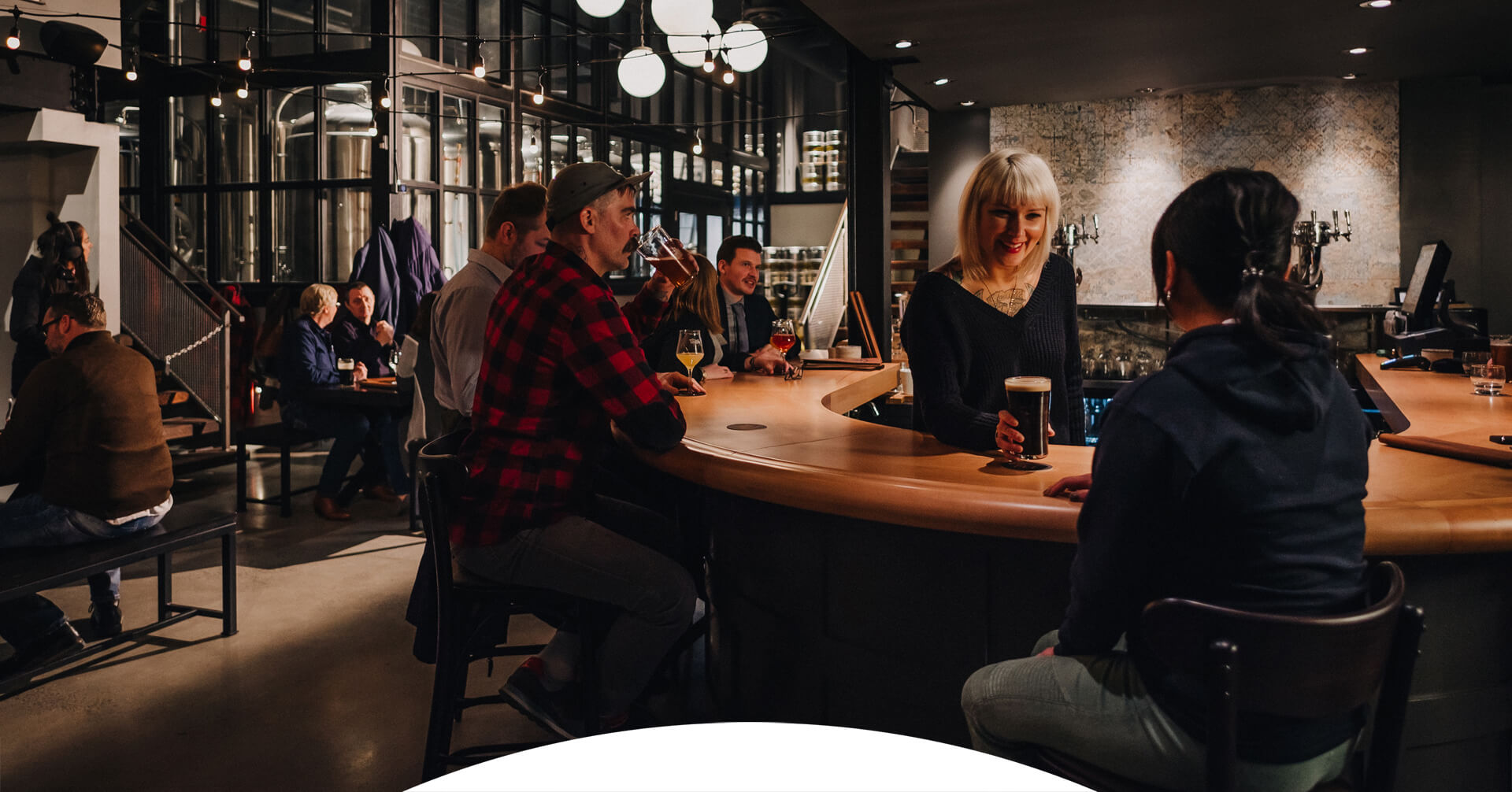 We know what it’s like: You can’t get your work done or enjoy your day off because you’re consumed with the need for answers to big questions. How is IPA different from APA? Why is Ottawa Canada’s capital city? Is there actually string in quantum string theory?

Go ahead, ask us anything. We’ll answer here, and beer drinkers everywhere will be a little bit smarter. (Results not guaranteed.)

Who was the first person to fart on the moon?

It reminds us of the story we’re oft told by a friend of Flora Hall Brewing, who sits at our horseshoe bar downstairs and amiably shares many a nonsensical and dubious tale. It’s the story about the season-end party for his rec league hockey team, when, as a novelty, the lads invited along a local professor of astronomy, or some other such spacey faculty.

Later, after steaks and ales, the team lined up in the back yard as the professor, whose passionate eagerness for his subject was no match for the team’s passionate fondness for beer, prompted all to take turns looking through a telescope that he has provided.

“Look there,” he said and pointed to a black bit of sky, “you can see Mars.”

At that moment one of the team members, probably the goalie, passed an audible fart. The professor winced.

Another player said, “I can hear Mars.”

Another player said, “I can smell Mars.”

In actual fact, the moon is much closer to Earth than is Mars, and can sometimes even be seen without a telescope. Because it is so close, 12 humans have walked on the moon, so there’s a reasonable chance that someone caused the first lunar wind and that it, being in almost zero gravity, could still be circling the moon, eternally. Unfortunately, NASA considers “extra-orbital flatulence” to be classified, so the definitive answer to your question, GG Wannabe, remains unattainable.

Nor do we know who was the first to pass gas anywhere in space, or even if that pungent pioneer was human. The first living creature to orbit the Earth was Laika, a dog sent up by the Soviet Union. As anyone who’s familiar with canine gas clouds knows, they can form their own nebula.

All joking aside, farting in space can be serious — indeed, it can be deadly, literally, and not just figuratively like an SBD. We sent your question to our Research & Canning Department, which consulted that renowned journal of astro-physics, HuffPost UK. An article there led to several others, which considered such questions as what happens when you fart in space. Sadly, we could not determine whether an astronaut who farts inside a space suit swells up like the Pillsbury Doughboy.

But the article tells us that a space fart doesn’t move and just hangs there in the air forever, which reminds us of Uncle Scott after Christmas dinner, when he would laugh uproariously at his own gaseousness, and then protest loudly — “Stop fluffing it!” — as Aunt Zelda as she waved a fine linen napkin at him.

We also learn that space suits have filters to deal with bodily gases, which really can be deadly if they build up. HuffPo colourfully reports that one academic study “analyzed the farts from a group who were put on a space diet with a group who were fed bland foods. What they found is that those who were fed the space diet produced gasses that were more flammable than the control group.” (We are not making this up. Here’s a link…)

Unfortunately, and we report this to you with great regret, it turns out that it is not possible to fart in space and jet yourself around the room like a deflating balloon. “We all tried it,” Canadian astronaut Chris Hadfield reportedly wrote on a Reddit AMA a few years ago. “Too muffled, not the right type of propulsive nozzle :)”

We believe that may have been the first emoji in space. Regardless, we will now conclude by noting that we have answered this question without a single Uranus crack.

Wasn’t Flora Hall on Hollywood Squares back in the day?

Firstly, we should explain to our younger readers that The Hollywood Squares was a television program that was popular many years ago, and which featured sardonic celebrities who answered questions such as, “In bowling, what is a perfect score?” (Rose Marie quipped, “Ralph, the pin boy.”)

Frequent guests on the program included Paul Lynde and Vincent Price, who later went on to host The Price Is Right. The Hollywood Squares debuted in 1966 and was in and out of production until 2004, when television finally went off the air due to Snapchat.

With “back in the day” we believe you’re referring to the original series, and the answer to your question is, no. Flora Hall never appeared on The Hollywood Squares, because Flora Hall is not a real person.

Flora Hall Brewing is named to draw the focus to our building, with its long history as an iconic structure. It opened in the 1920s as an electrical garage, and later it was an auto garage, a place to repair cars. Now it is a brewery, a place to repair for a pint. It is a neighbourhood hall, a place to gather. So Flora Hall is real, in the community sense.

Oh, don’t let us mislead you, there are real people named Flora Hall, and though we know none of them personally, our Research & Canning Department has confirmed that none of them has appeared on The Hollywood Squares, nor on any other television game show, though Let’s Make a Deal was for many years hosted by Monty Hall (no relation).

Who, you ask, are these Flora Halls, or Floras Hall? (editor – check with Research & Canning). Well, for example, there is a minor British royal named Flora Hall who is 6,784th in line for the British throne and lives in Oxford. Others of the same name, who will never be royals, live in Ontario, Ohio, Oregon, Oaxaca, Oslo, and Zaire.

So, as you can see, the world is full of Flora (Floras?) Halls (Hall?). Whichever, the only “Flora Hall” at Flora Hall Brewing is the fictional title character in our popular weekly webisodes about an inquisitive child who searches the world for the perfect craft beer, Flora the Explorer.

What is the disaster recovery plan for Flora Hall when the zombie apocalypse happens?

The Zombie Apocalypse is like the next flu season, in that just as we don’t know which strain of flu will sweep through and, ergo, which vaccine would save us, we can only guess whether the zombies will be plodders or runners. As with any threat, you can’t prepare a defence when you don’t know what you’re defending against. Nonetheless, Flora Hall is always prepared for any invasion, be it natural (locusts) or supernatural (zombies).

Though planning for the Zombie Apocalypse has never been easy, it once was easier, before movies and television muddied the waters. At one time, we all knew zombies as slow creatures, like mummies without bandages, always lumbering about and tottering drunkenly.

There had been fleeting appearances of more limber zombies, which, despite continuing challenges with motor control and balance, were fast indeed. They even, sometimes, had rhythm, as witnessed in the video for Michael Jackson’s Thriller, which featured zombies dancing in sync, and which won the 1982 Grammy Award for Best Undead Video.

Overall, however, zombies remained slower than service at the DMV. That is, until some genius in Hollywood asked, “Hey, zombies are so slow, it’s like being chased by a tortoise. Why don’t we speed them up?”

Our Research & Canning Department reports that the big bang for fast zombies was Danny Boyle’s 2002 movie 28 Days Later, in which zippy zombies beset a character played by Cillian Murphy. (Today, as Thomas Shelby in the TV series Peaky Blinders, Murphy would blind the zombies with a slash with his deadly cap, leaving them to stagger about and step on rakes and such.)

Speeding up zombies was one of the great innovations in cinema, the biggest leap forward since the introduction of colour film. It led to a great resurgence in zombie culture and industry. Great fortunes were earned by those who had invested in zombie futures before the zombie bonanza arrived.

Nowadays, zombies are everywhere, in movies, in video games and, most notably, in the long-running TV show The Walking Dead, with its multi-season plot line that, some critics say, lumbers along like the teetery villains at its core. (Also, had none of the millions of people who turned into Walking Dead zombies seen 28 Days Later, and gotten the speed idea? It’s like that Far Side cartoon of a flock of geese walking along and one looks up and sees other geese flying and he says, “Hey, look what they’re doing!”)

Anyhow, there are now so many zombies about that one wonders if the apocalypse is already upon us, or at least the pieces in their positions. Yet we can only guess which type of zombies will attack: Will there be trundling hordes, or a few speedy strikers?

At Flora Hall Brewing, we regularly run drills with all staff for our Zombie Apocalypse Prevention Strategy (ZAPS), and the drills always begin with our Zombie Intervention Protocol Supervisor (ZIPS) roaring a hearty, “To the barrels!”

On the back wall of Flora Hall is a raised platform, and on it are a dozen large wine barrels full of special beers, which will continue aging for another few months and more. Upon hearing the ZIPS’ ZAPS command, a trio of highly trained staff fetches the ladder and installs it on the back wall, and any other staff on site when the zombies attack climb the ladder to the barrel platform, and then pull up the ladder. It is crowded up there, and some staff have to sit astride the barrels, as if riding them.

Zombies can’t climb, and if they try to jump too vigorously their limbs will fall off. A zombie, with sufficient thrust, can jump right off its own legs, a condition known as leglessness.

So, George Gill, our “discovery recovery plan” is to climb up on that platform and pull up the ladder and stay there as necessary. We will then roll barrels onto any zombies that approach. The Research & Canning Department’s computer models show that, properly rolled, one barrel can take out as many as two zombies, or three if the undead are particularly dimwitted.

As for any zombies that get too close, we’ll drop 50-pound bags of malt on their bobbling heads.

Note that after the Zombie Apocalypse, Flora Hall Brewing will be open for business as usual, 3 p.m. Monday to Thursday, and at noon Friday to Sunday. If need be, we’ll fill more barrels.

TWO NEW BEERS on the board! Fresh, crisp Bohemian

BEAUTY FALL weekend ahead! Flora out Front will b

RETAIL MONDAYS, we open up the shop at noon! Our

SO HAPPY to be back at @therowanottawa! Superb fo

Sign up for our email newsletter and get first notice of new beers, new dishes and special events. We promise no spam, in your inbox or in our kitchen!

Thank you for subscribing. Check your email for the confirmation message.